Today, I am featuring my second post on Virginia Woolf’s garden, Monks House. If you missed my first post, it is HERE.  In letters to friends Virginia said, “ The point of Monks House is the garden. I shan’t tell you, for you must come and sit there on the lawn with me, or stroll in the apple orchard, or pick—-there are cherries, plums, pears, figs, together with all the vegetables. This is going to be the pride of our hearts I warn you.”

But, first we must go down “The Street” to get to the cottage. This is the main street in Rodmell! It is a one lane road from the pub on the corner, to the old mill at the end. Monks House is near the old mill.

Here we are in the garden at Monk’s House. It so so peaceful here!

Many of the details of day to day life found in Virginia’s diary include the gardens. (Note the writing from her diary displayed on the chalkboard in front of the glasshouse that is being reconstructed in the yard.)

By 1928, after expanding their plot, Virginia felt they had really started to “dig in.”

So the Woolfs spent their days comfortably, with Virginia writing in her room or in the lodge, and entertaining many of their Bloomsbury friends, while Leonard became an expert gardener.  Virginia often commented the garden was the third person in their marriage. For Leonard tending and developing the garden was totally absorbing. Virginia found peace and tranquility in the garden which helped her mental state of mind, and walking to her lodge every morning was part of her creative routine.

The vegetable garden was so productive, that when the Woolfs were in London they would have a hamper sent to them every week to keep them supplied. The excess produce was sent to the Women’s Institute market.  Home Fires on BBC’s Masterpiece Theatre is a good start to learning about the Women’s Institute and a very good movie about how one of the women’s group chose to raise money is portrayed in Calendar Girls. It is one of my favorite movies.

In 1933, following the publication of Flush (Virginia’s biography of Elizabeth Barrett Browning’s cocker spaniel named Flush) they were able to make additions to their garden.  Upon returning from a trip to Tuscany in the same year, work started on an Italian garden by adding plants, pavings and walkways to various parts of the garden.  Virginia’s contribution was to buy pots, urns, and a statue.

Eventually as the garden grew Leonard employed a gardener, Percy Bartholomew,  who would live in one of the cottages near the property that the Woolfs had bought when they purchased Monk’s House. Although their garden was small and unpretentious compared to that of some of their friends, notably Vita Sackville-West, the delightfully small, informal garden is what made it so special. Leonard was so engrossed in gardening that in 1941 he founded the Rodmell Horticultural Society. I wondered if it included everyone in the village, because it is a very small place! Maybe it was his Bloomsbury Group!  See you in the garden next week!

Won’t you join in the Garden Challenge hosted at #MyGloriousGardens? I think it will be inspiring to see all the other gardens and what you are doing in yours too! 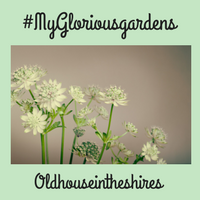 This site uses Akismet to reduce spam. Learn how your comment data is processed.

inSpirations and inSights on my pebbled garden path...